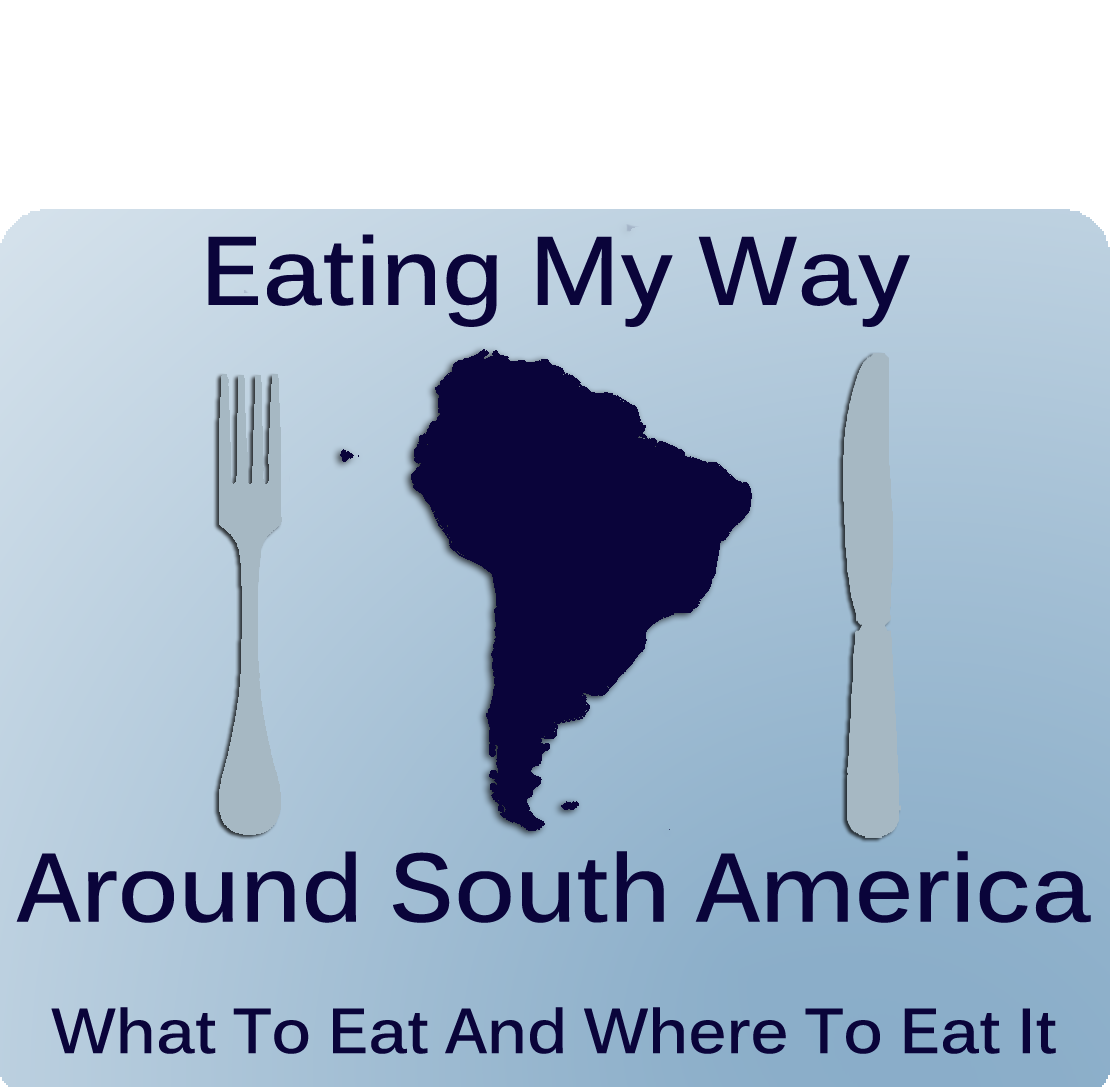 Eating My Way Around South America

Posted on November 17, 2014 By infused exposures

WHAT TO EAT: Arepa con huevo

WHERE TO EAT IT: Colombia.  You can find it in cities like Cali or Bogota but the best and the original is all along the Caribbean coastline.

I just realized that I have yet to present one of my favorite South American countries through food, Colombia.  Both Laurent and I fell in love with this country.  The landscape is varied and beautiful ranging from the coastal Caribbean with its crystal blue warm waters in the north to the lush, green mountain interior and the Amazon jungle to the south.  Every part of Colombia we traveled was full of friendly, welcoming people who were eager to share their beautiful cultures and traditions with us and of course, their food.

the beautiful Caribbean coast of Colombia

The foods of Colombia changed just as much as the landscape did, each dish representing a different side to this endlessly fascinating country.  I can’t wait to share with you all the different foods I discovered here but for now, I am just going to focus on one of my favorites that we found everywhere in the north all along the Caribbean coast, the humble arepa con huevo.

The first time I tried this, Laurent and I were on the Caribbean coast in the San Bernardo islands.  We decided to camp and a lovely woman named Lena allowed us to pitch our tent on her gorgeous waterfront property. Our backyard was coconut trees and directly in front of our tent we had jaw-dropping views of the Caribbean Sea. Now that’s what I call a room with a view!  Meals were included and were simple yet delicious dishes. For breakfast every morning, Lena cooked us up two arepas con huevo.  Served with a simple cup of tinto (Colombia’s sweetened coffee), it made a perfect start to our day.

our room with a view!

Both Colombia and Venezuela can lay claim to fame for creating this quintessential street snack, the arepa.  What the pupusa is to El Salvador, a gordita for Mexico or the sandwich to the United States, so is an arepa for these countries. In Colombia the arepa runs deep, going back centuries as a food consumed by the indigenous people which was later passed on to the farmers.  Today it is the premier street food in the country with countless regional variations existing from north to south.  And while it’s not the healthiest food, being deep-fried, it is suitable for those with gluten intolerance.

Just like in Venezuela, particular styles, fillings and even the dough can be different depending upon where you are. By far, the most common arepa is the simple grilled variety found on almost every street corner throughout the country.  Often a thick cake grilled directly on the street over charcoals and slathered with butter, sometimes stuffed with cheese, it is a completely irresistible snack.  If that smell of corn grilling over an open fire doesn’t grip you and make you stop in your tracks, then I’m not sure what will! 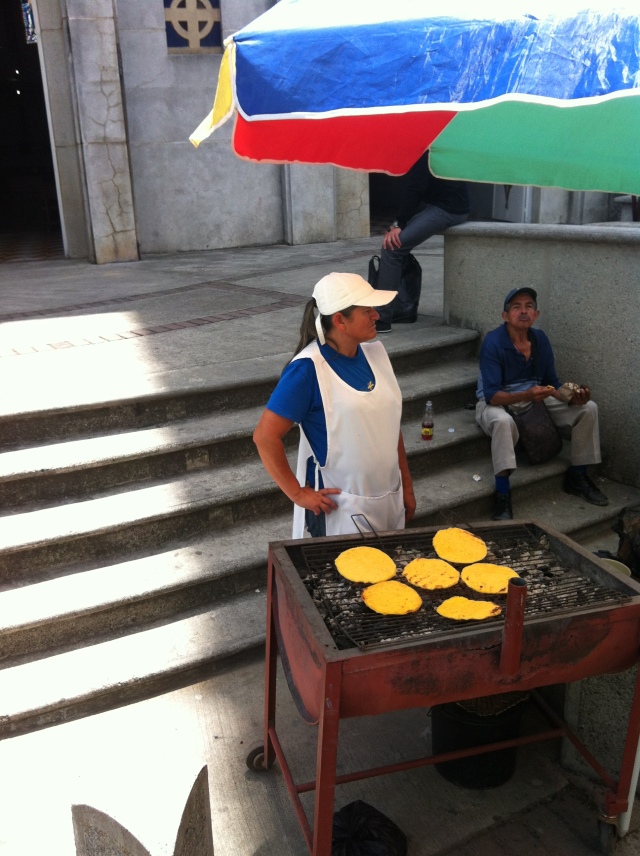 arepas get grilled up on almost every street corner

For the uninitiated, an arepa is a humble food, just a simple, unleavened, round flatbread made from corn. Traditionally it was made using soaked corn kernels but today, pre-cooked maize flour is used (more often the instant variety).  White or yellow corn is utilized, depending upon the region you are in.  Arepas can be stuffed, fried, grilled, baked and boiled.  The Venezuelan variety are typically split and stuffed like a sandwich.  An arepa con huevo is simply a fried egg encased in corn. 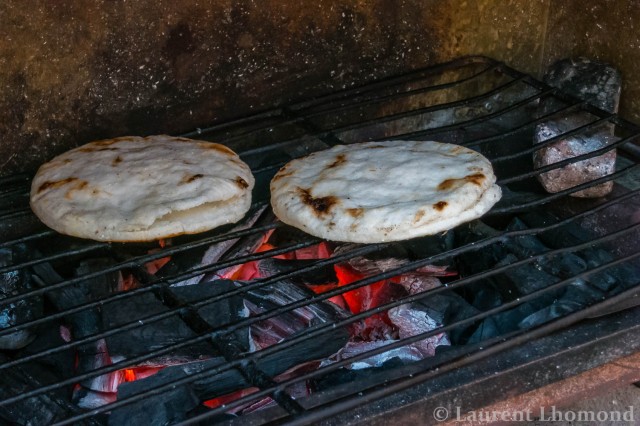 In Colombia they also fill them, making this sandwich-like snack more hearty.  Perhaps one of the best ways to eat an arepa is fried. What food isn’t instantly made more irresistible by frying it?  The arepa con huevo is no exception. This variety originated along the Caribbean coast, in the northern region of Colombia.  It became so popular, you can nowadays find it in every major city in the country  It’s usually served for breakfast and is perhaps the ultimate in breakfast comfort foods.  Move over Cheerios, the arepa con huevo is the new breakfast of champions!

So how do you make one of these tasty snacks? It’s pretty simple.  Just take an arepa, crack an egg inside and slip it into the deep fryer for an unbeatable breakfast.  Some places will even insert a slice of ham and cheese.  I imagine bacon would be a welcome addition too.  Go ahead, I won’t tell.  And don’t just limit it to breakfast. These are delicious at any time of the day!

The dough for an arepa can be prepared in two different ways.  The traditional and much more labor intensive method required the kernels of maize to be soaked, peeled and later ground in a large mortar called a pilón.  This left just the endosperm of the corn behind which was used to make the dough.  It was known as maize pilado and it had to be boiled first then ground into a dough.  Some places in Colombia still adhere to this old traditional way of making the masa and if you can find these places, be sure to sample the arepa con huevo there because the taste and texture are noticeably richer.

More often these days, you will find precooked arepa flour.  Because it is already cooked, it forms into the arepa shape with ease.  Areparina, is a brand readily available in Colombia and it is what most street vendors use.  You simply mix the dough with water, salt and sometimes butter or milk and it’s ready to be used.  In North America, you can find this dough in Latin American markets, labeled masarepa (masa for arepas).  Click here for a link to the Goya brand available on Amazon.

Things You Will Need:

-a little pinch of salt and sugar-half teaspoon each

-oil for deep frying but you don’t need an actual deep fryer.  Just use a heavy bottomed wide pot

*If you are new to my site, remember I don’t like to give exact amounts.  I want to teach you methods and how to cook rather than relying too heavily on a recipe.  That said for things like this dough, I will give you the measurements. If you want to make a lot, increase the recipe using a 1:1 ratio.  For example, one cup flour, one cup water, 2 cups flour, 2 cups water, etc.

I am not gonna lie.  Arepas con huevo takes a bit of practice.  The old ladies making these on the streets of Colombia will fool you into thinking that it’s as effortless as they make it look.  Don’t believe it.  But also don’t get discouraged. They aren’t that hard to make and with some practice you will be an old pro.  Take my tips into consideration and your life will be a lot easier when trying these for the first time.

Follow the package directions for the arepa or just take 1 cup of the flour and mix it with the salt and sugar.

Add the warm water and mix gently.  Tip: Let the mixture sit for at least 5 minutes.

If using the proportions above (1 cup to 1 cup) then separate the dough into four pieces.  Roll into balls.

Tip: Use parchment or plastic wrap to help you flatten the balls.  Parchment works best.

Take one fourth of the dough and put it in between 2 pieces of parchment.  Flatten into a pancake or pita bread shape about 1/4 thick

Tip: Make sure that the dough is indeed 1/4 inch and is thick enough because you are going to be inserting an egg into it.

If you have a deep fryer, heat the oil in that according to your fryer’s directions.  If you don’t have a deep fryer, no big deal.  You can just use an ordinary wide pot.  A heavy bottomed one works best.  Fill the oil at least half but preferably a bit more.  You can reuse this oil many times, so don’t fret that you are using so much.  To save it, wait til it cools then store it in a jar or an old coffee can. Heat your oil in the pot. Tip: Only fry one arepa at a time-you don’t want to crowd the pot.

Once the oil is at 350 or hot enough for deep frying, add your arepa.  Cook for about 1.5 minutes on each side.

Carefully take the arepa out with a slotted metal spoon and transfer to paper towels to drain extra grease.

Crack an egg into a small bowl or ramekin or even better, something like a pyrex glass measuring cup with a spout. Tip: Do NOT attempt to just crack the egg into arepa your first time!  The ladies in Colombia do this with one hand but it is NOT easy! Putting the egg in a bowl first ensures a mess-free addition!

Take a small, sharp knife and slice a small slit on one side of the arepa as if you are splitting a pita.  But just a SMALL slit!  You want it to be big enough for the egg to be added inside but no more.

Take the egg in your bowl or measuring cup and pour into the arepa.  Slide it back into the hot oil.  Tip: Be sure to put the arepa back in the oil with the slit side up!  I think it goes without saying but if you put it in the other way, the egg will fall out into the oil!

Fry for an additional 2-4 minutes, depending upon how you want long you want your egg cooked for.

Tip: If you want to add bacon, cheeseor ham, add it in before the egg!

To Make This Vegan:

Obviously it won’t be called arepa con huevo anymore but you can make the arepa as directed above and instead of adding an egg, saute some spinach and mushrooms together.  Squeeze the water out of the mixture and add to the arepa in place of the egg.  Continue as directed above.  Get creative with the fillings!  It’s truly limitless but you’ll want to make sure you try to get most of the water out.

To Top Your Arepa:

Normally the arepa con huevo is served naked with just some salt sprinkled on top but at almost every street stall, you’ll find some aji picante (the Colombian version of a spicy salsa).  If you like a bit of heat, this is the ultimate topping.  I’ve also seen it served with hogao, which is a delicious, savory cooked condiment with a base of tomatoes and onions (sometimes garlic, spices and cilantro are added too).

Grab a cup of tinto or coffee and buen provecho!

One Comment on “The Real Breakfast Of Champions: Arepa con Huevo”